“Another obstacle for the hacker movement, as every new meeting of the Chaos Computer Club demonstrates, is in managing to draw a front line in its own ranks between those working for a better government, or even the government, and those working for its destitution. The time has come for taking sides. It’s this basic question that eludes Julian Assange when he says: “We high-tech workers are a class and it’s time we recognize ourselves as such.” France has recently exploited the defect to the point of opening a university for molding “ethical hackers”. Under DCRI supervision, it will train people to fight against the real hackers, those who haven’t abandoned the hacker ethic” 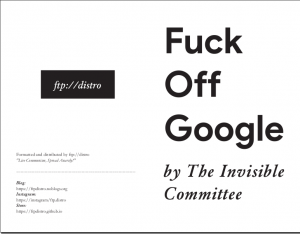